The second part in the “2014: A Bad Year” trilogy continues the multi threaded story begun in Part One. Newcomers should read Part One first. 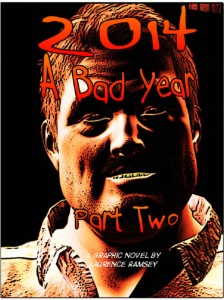 The storm clouds are gathering in the England of the near future. An unpopular coalition government struggles to maintain control over a bankrupt society riven by intolerance, menaced by terrorism and haunted by the rise of right wing extremism.

Harry Broadwater of Scotland Yard discovers the uncomfortable truth behind the death of an MI5 agent found dead in a London flat. He has the choice of undertaking a cover up or going public with his findings.

Financed by the rich but naive Guy Dodman, the Islamophobic English People’s Crusade prepares to move into mainstream politics under the guidance of the sinister and manipulative ex-judge Cain Magwitch.

An impressionable young Briton goes to study in a religious school in Pakistan where he hopes to find “a purer form of Islam.” He returns to Britain a changed man – in a way that he didn’t expect.

Susan Creighton-Ward becomes the target for Captain Joshi of Pakistan’s sinister secret service as he attempts to find out about the U.S. Government’s mysterious “Operation Alexander.” The dangerous Gabol twins are helping him – as long as he is willing to pay them.

On contract to a wealthy insurance syndicate Sam Cambell, the software expert, travels to the headquarters of Minidyne in Silicon Valley and begins to search for the truth about the software giant and its products.

Whilst back In London, the deranged and violent George Woodfield continues his mission to rid the world of “Islamic extremists” with the aid of a powerful handgun.

The climax of the book is a shocking terrorist attack on a London landmark.

This is a work with some differences to the standard graphic novel or comic book.

Firstly, there is no omniscient narrator: the story is told from multiple viewpoints using contrasting characters because, in the words of a disenchanted policeman, “Innocence and Guilt are relative terms nowadays. There is no clear black and white anymore.” It harks back to the style of the Hollywood “Film Noir” of the 1940′s and 50′s with a first person, confessional narration, a rich plotline and a sense of alienation, paranoia and menace.

Secondly, the work is intended for mature readers. There are no superheroes, escapist fantasies or plots revolving around adolescent wish fulfillment. It aims to portray the world as it is, rather than how we would like it to be. Some characters express extreme racist views. There is frequent bad language and profanity. People are flawed and sometimes violent. This violence results in characters really getting hurt or killed. Some readers have said that the tone is too dark; others have described it as realistic. It is quite different to the products of the American comic book industry, not least because of its British origins. One reader wrote of part two that: “there is something in it to offend just about everyone.” If you are easily offended, this book probably isn’t for you.

IMPORTANT NOTE: Unlike nearly all the other graphic novels or comics in the Kindle store, this work has been especially formatted to be readable on the Kindle – although it will not work with older (pre 2009) versions of the reader. If you’re not sure whether it works on your model, you can download the beginning of the book using the TRY IT FREE feature in the Kindle store. If you have a color device (such as a Kindle Fire, Android Tablet, iPad, iPhone, PC, Mac or Smartphone) then you will be pleased to know that the book is in full color. It really pushes the boundaries of what the Kindle graphic display is capable of but looks great on other devices as well.