From the Author, Laurence Ramsey:

“The graphic novel “2014: A Bad Year – Part One” is the first instalment of an epic trilogy set in what I hope is an alternative world of the near future: a world slowly and reluctantly sliding into war and where political intrigue, criminality, religious fundamentalism and terrorism are rampant. The book is recommended for a mature readership due to its frequent strong language, occasional violence and adult situations. 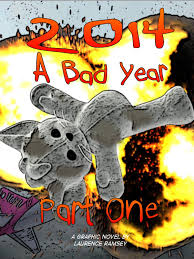 Every action has its consequences: remember the old cliche about a butterfly flapping its wings in Brazil setting off a tornado in Texas? “A Bad Year” looks at the chain reaction of events following a routine police raid on a London slum in April 2014.

These events take place in quite different locations spread across England, America and Pakistan. The first part (which takes place in April and May 2014) is set mainly in London, where an increasingly fragmented society in the throes of an economic collapse is the stage for a destructive cycle of increasing terrorism and resulting state repression.

The story is told from multiple viewpoints using contrasting characters because, in the words of a disenchanted policeman, “Innocence and Guilt are relative terms nowadays. There is no clear black and white anymore.” It harks back to the style of the Hollywood “Film Noir” of the 1940′s and 50′s with a first person, confessional narration, a rich plotline and a sense of alienation, paranoia and menace.

Despite this, the work is grounded in today’s reality and features believeable characters and situations. There are no superheroes and violence, although comparatively rare, is serious and often fatal. Nevertheless, there is still room for love, loyalty and friendship amidst the gathering darkness.

Unlike other graphic novels or comics in the Kindle store, this work has been especially formatted to be readable on the Kindle – although it will not work with older (pre 2009) versions of the reader. If you’re not sure whether it works on your model, you can download the beginning of the book using the TRY IT FREE feature in the Kindle store. If you have a color device (such as an iPad, iPhone, PC, Mac or Smartphone) then you will be pleased to know that the book is in full color.”